The History of Denturism - Dentures through the Ages

Berlanga Dentures Blog The History of Denturism - Dentures through the Ages 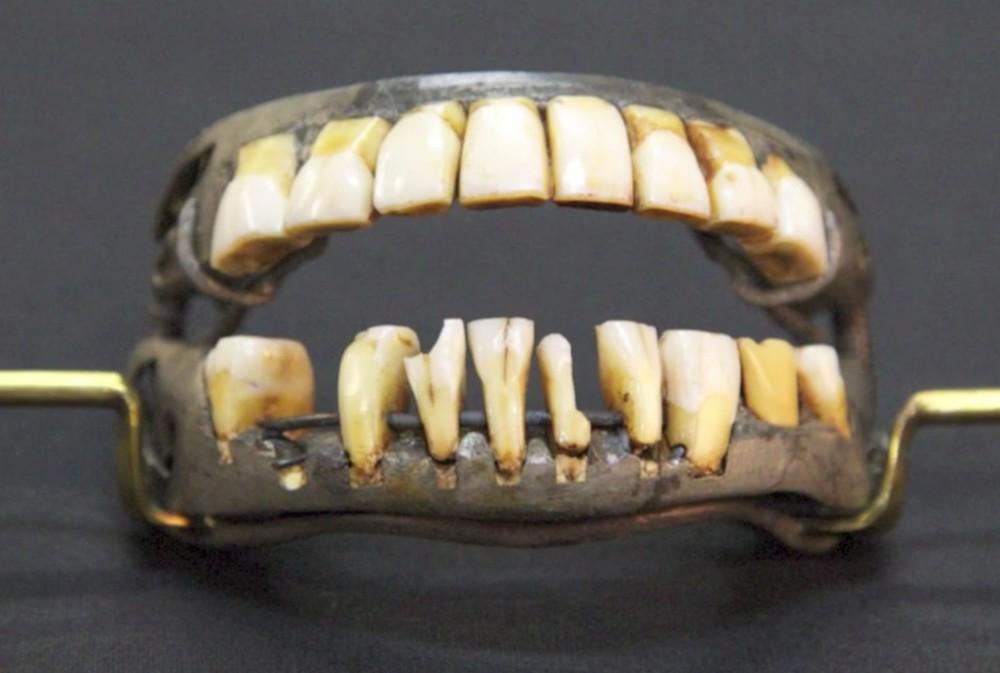 The use of “false teeth” has prevailed throughout the course of history. Archaeological evidence dating back to 1500 B.C. was found in Egypt. The Egyptians would use real teeth threaded with a gold wire to create a false set of teeth. In northern Italy 700 B.C., the Etruscans made dentures out of animal teeth. 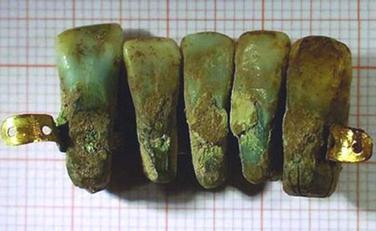 Despite being made of low quality material and having short life spans, dentures were relatively popular.

The first complete set of dentures is attributed to 16th century Japan. They were known as the “Japanese box” and are quite similar in shape to modern day dentures. 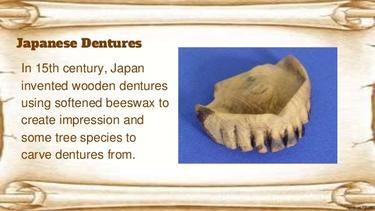 In the 1700s, ivory dentures were developed from walrus, elephant or hippopotamus tusks. Alexis Duchateu crafted the first porcelain dentures in 1770. These were prone to cracking and appeared too white to be natural teeth. Duchateus was a pharmacist, since Denturist, as an occupation was yet to be established. 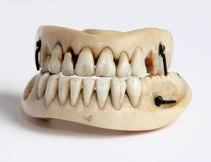 In the 1800s, the incidence of dental decay and tooth loss began to increase rapidly due to an increase in the consumption of sugar. Sugar consumption rose by 500 percent. A need for an alternative form of dentures was needed.

In 1815, the battle of Waterloo, gave rise to the highly demanded “Waterloo teeth.” These were dentures crafted primarily from the teeth of dead soldiers seated in a base of animal ivory. Waterloo dentures gave the appearance of natural teeth and were not as prone to breakage as porcelain dentures.

In 1820, Claudius Ash was given the task of crafting a new and improved form of dentures. Ash was a silversmith and goldsmith. He constructed porcelain on 18-karat gold plates. The springs that held the dentures together were also made of gold. Dentures that were previously made from natural teeth or porcelain were both aesthetically and functionally inferior in comparison to Ash's design. 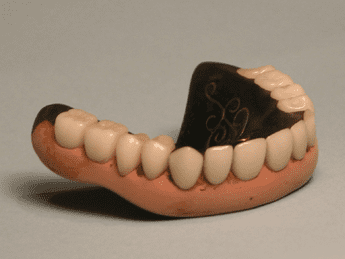 In the 1850s, Ash and his company developed Vulcanite (hardened rubber that seated porcelain teeth). His company was the leading supplier of this form of dentures in Europe. Charles Goodyear was awarded the patent for Vulcanite-based dentures in 1851. Dentures, at the time, were primarily focused on aesthetics. Early in the 20th century, dentistry shifted from treatment-based therapy to prevention. Since dentures were in line with good health, they became more popular. At this point, having an occupation specifically dedicated to dentures alone became apparent.

The 1919 Tasmanian Dental Act made a clear distinction between the role of a Dentist and the practice of denture making. For a patient that required dentures, a consultation by referral from a Dentist became normal procedure

The Health Amendment Act (1933) was the first legal document that gave rise to the practice of Denturism in Canada. The Dental Mechanics Act of Alberta (1961) was the future update to this legislation allowing Denturists to begin work in the field. They were also known as “Dental Mechanics” or “Denture Therapists.”

Denturism is a recognized profession throughout the world and is currently utilized in many countries including Australia, New Zealand, the United States, the United Kingdom and Canada. In the United States, however, denturism is only legislated and practiced in 7 states (Maine, Arizona, Idaho, Montana, Oregon, Colorado, and Washington). The National Denturist Association (NDA), helps to raise public awareness of the Denturist profession.  The goal of the NDA is to promote awareness of the professional, so that every citizen of the United States knows the benefits of the profession and is provided the opportunity to choose who their prosthetic dental provider will be.

In 1994, the People of the State of Washington passed Initiative 607, allowing persons other than dentists to manufacture and sell dentures to the public. This new professional would be known as a Denturist. A licensed professional whose field of dentistry is dedicated solely to providing removable full and partial dentures directly to the public. A Denturist is a recognized health professional who constructs, inserts and adjusts removable dentures as well as over dentures on implants. A Denturist is trained not only in the construction of dentures but also educated in microbiology, physiology, oral pathology, head and neck anatomy and more. Furthermore, they passed a comprehensive practical exam on the fitting and making of dentures along with a thorough written examination conducted through the State of Washington Board of Denturists.

Today Denturists are recognized as an important part of the health profession, and thanks to pioneers like the Berlangas who helped pass the initiative, the public now has the right to choose an affordable alternative when it comes to denture care.

Read more about the Berlangas HERE. 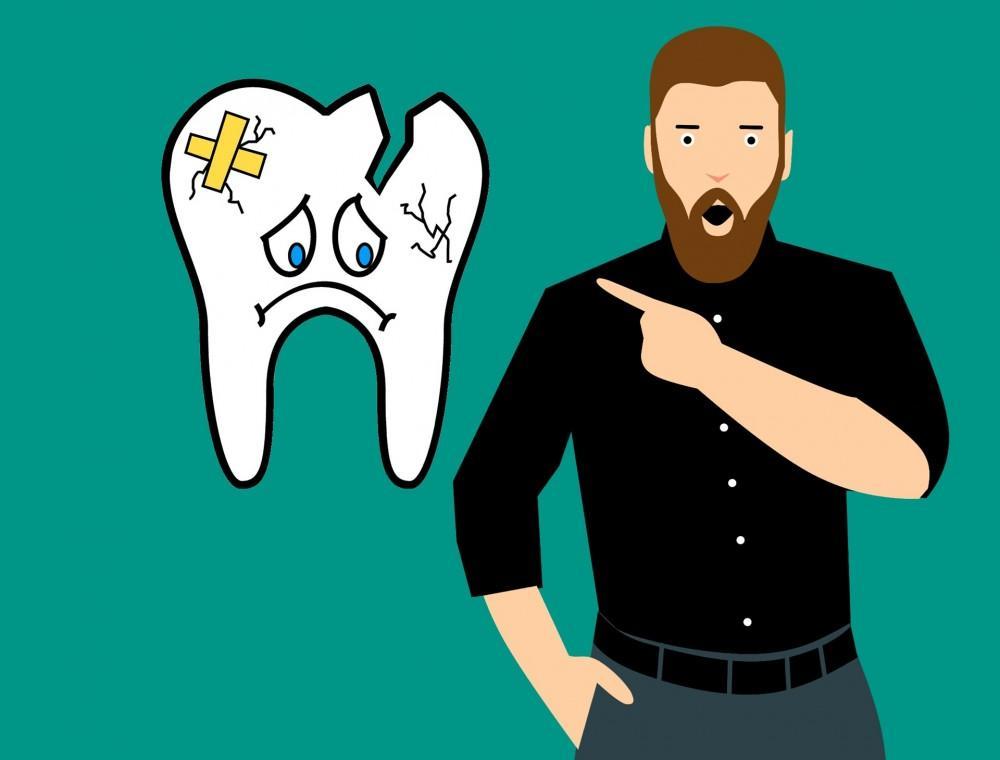 How Denturists Can Fix Your Broken Dentures, and Save You Time and Money!

Broken dentures can affect the way you eat and speak. If you’ve broken your dentures, contact Berlanga Dentures right away. We can help you with your broken denture needs at any of our three locations in Tacoma and Puyallup. 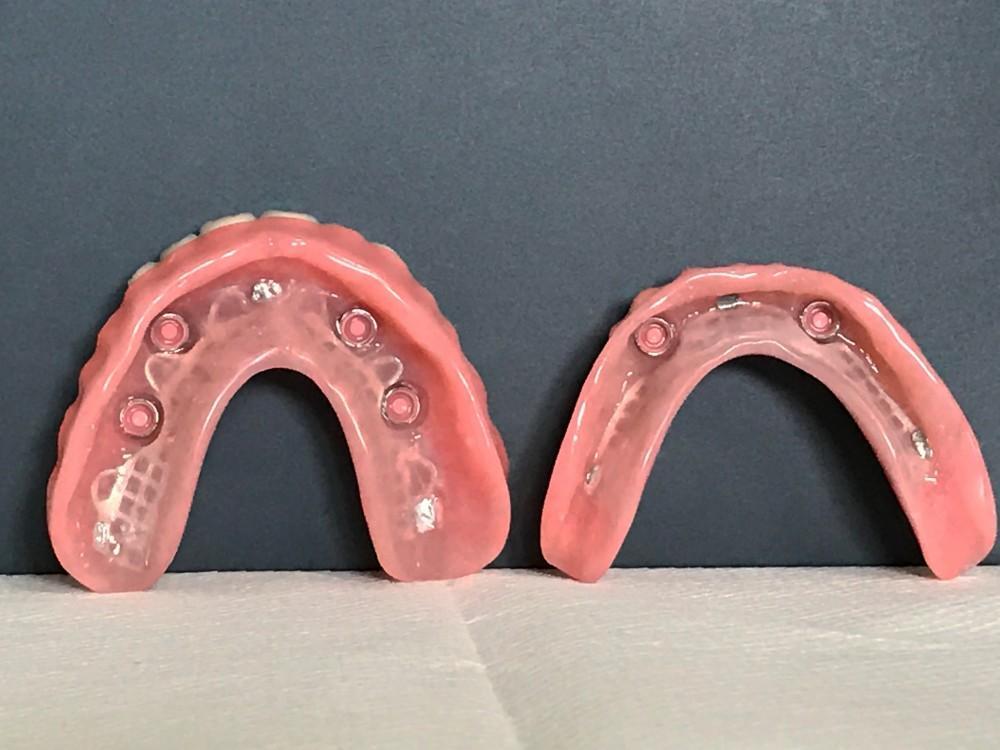 Here at Berlanga Dentures we do not offer all-on-4 dentures implants. There are many reasons why. We work with you to determine the best implant solution for your situation, health, specifications, requirements, and aesthetics.

How to Remove Tartar From Your Dentures

Keeping your dentures clean is an important part of keeping your mouth healthy. Your annual fitting is an excellent time to get your dentures professionally cleaned. Here are some tips for every day maintenance. 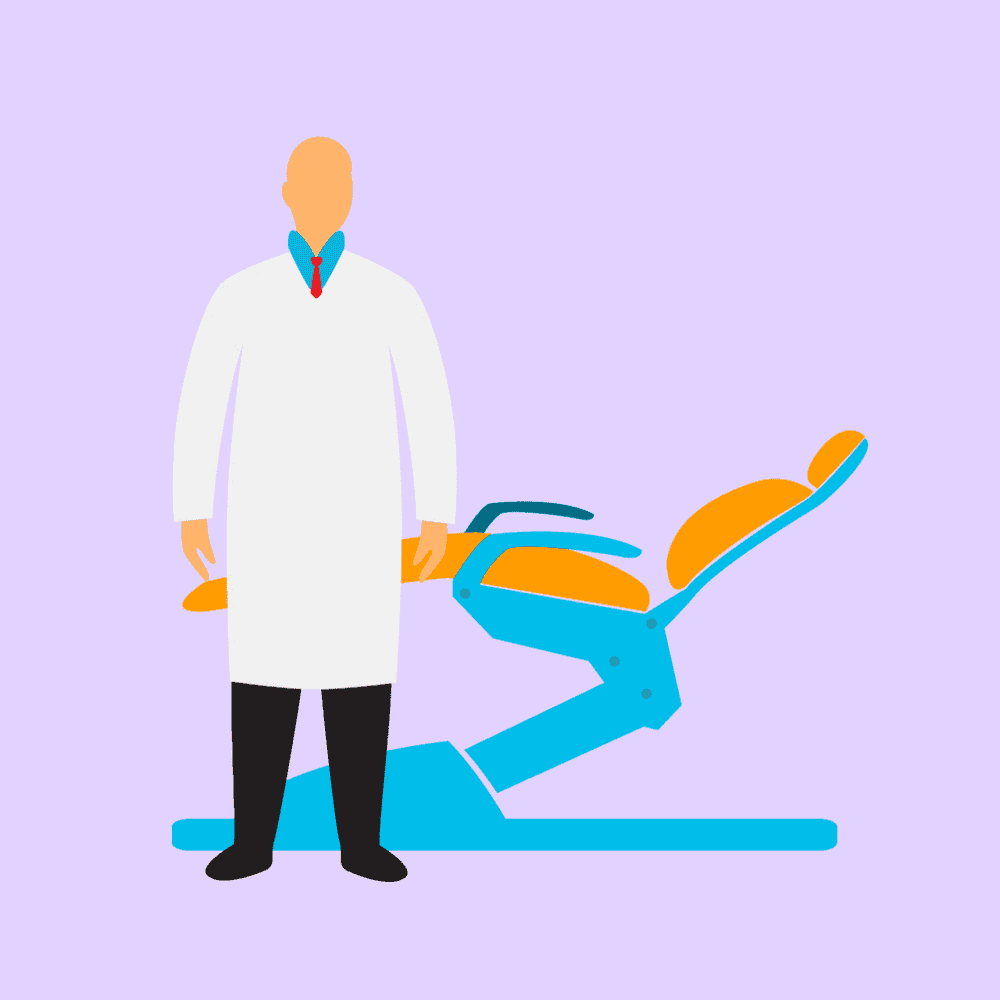 What is a Denturist?

A Denturist is a dental health care professional who provides denture care directly to the public, cutting out the middleman costs of labs. We examine patients who are missing some or all their teeth, and can design, construct, repair removable dentures. 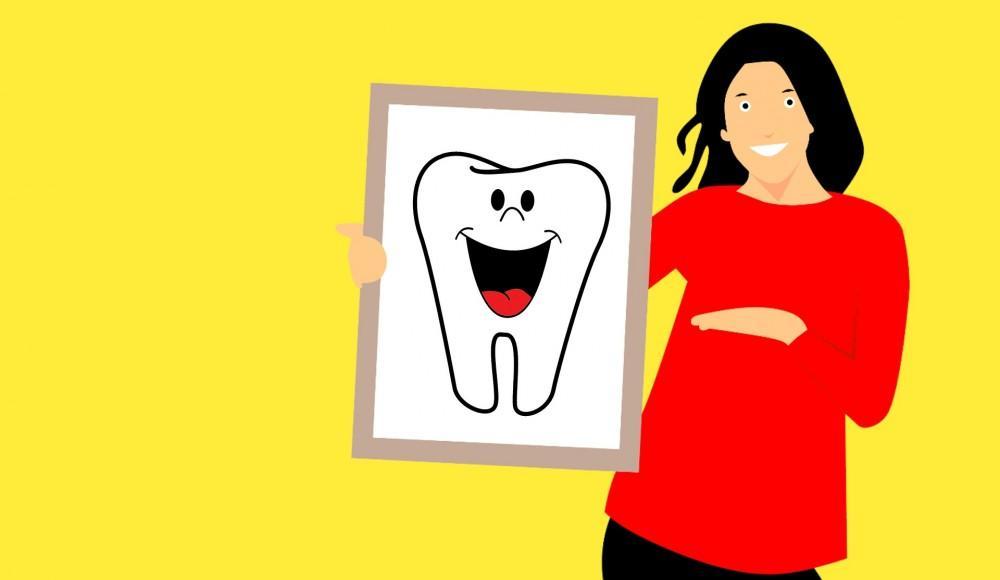 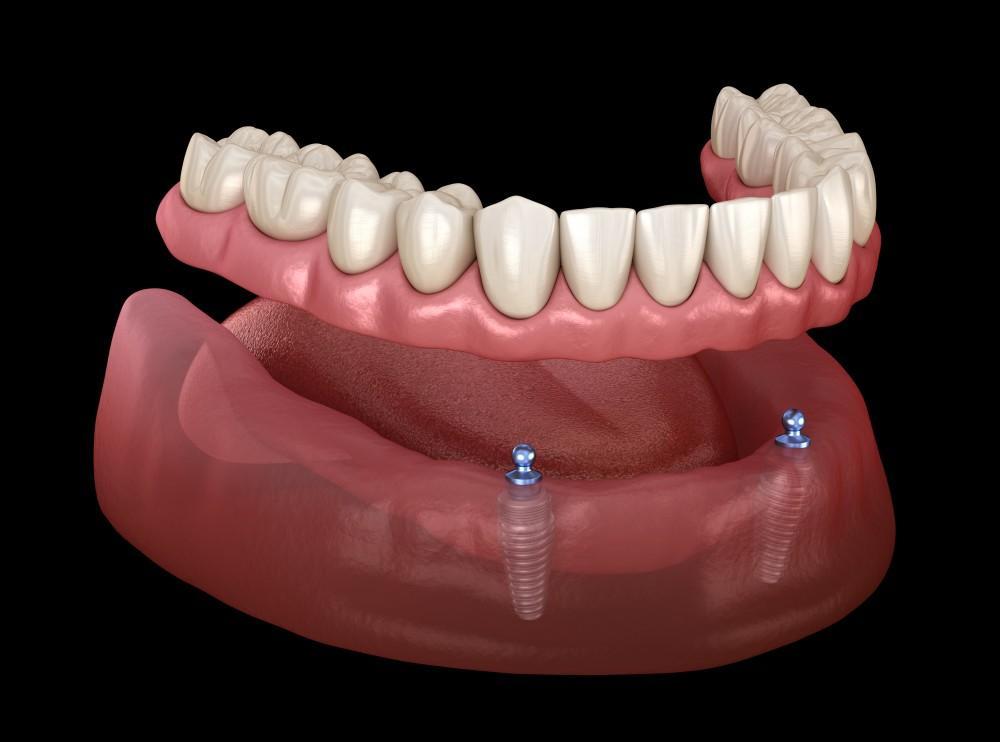